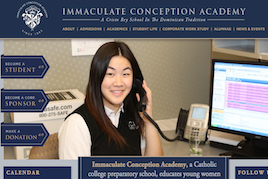 We heard of ICA for the first time when a friend was telling us why he was willing to make one third of his previous salary to work at a high school. This particular high school, the Immaculate Conception Academy (ICA), is a girls’ high school in the Mission where 85% of the kids have family incomes of less than $32,000/year. Our friend didn’t robotically list all the reasons why he should care about this school, but instead said something that told us a lot more about the school than any description could: he said simply, “This school is my second half.”

We got to see why he cared as deeply as he did when Cobaltix became involved too. ICA had started a program in which the school sends their students out to work in internships one day every week, and we wanted to provide positions for these students. The companies that participate make a donation of about $8,500 for a student to intern there during the school year. This program reduces tuitions substantially, enabling many kids to get a quality education that they likely would not otherwise have.

The first intern we worked with showed up for work on time as usual one day, but something was wrong. It only took us a few minutes to figure out that her dad had died of a heart attack the night before. We drove her home and let the school know. That afternoon, we did the only other thing we really could do – we paid the balance on her tuition and set up a small scholarship to help her with college. It seemed like a small gesture to us, but it made a big difference for her.

When the IT person/technology teacher quit, we had another big opportunity to help out. A few of us stepped up and took on her class for the remainder of the year. They wouldn’t be left behind. We revised the curriculum to make it more appropriate for the students, many of whom had not yet achieved Algebra II. We approached the class in a way that played to their strengths, and also prepared them for potential careers in the Bay Area. Though most students started out with minimal knowledge of technology, they used their understanding of their phones and the internet and took off running with what we taught them. We made sure the class gave them some general understanding of technology, computers, and how they work in businesses. We also taught them practical information that gave them a real chance at getting a job with career potential.

Over the past few years, we've continued to have students at our office and also continued to help them do great things to improve the technology and opportunities at the school. We’re committed to helping them achieve more than they once thought possible.